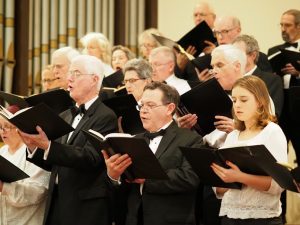 Sheepscot Chorus invites you to a concert featuring “Requiem for the Living,” on Saturday, April 29 at 3:00 PM, and Sunday, April 30 at 3:00 PM, at the Second Congregational Church in Newcastle. A chorister said this when we last performed the “Requiem”: “It was such an incredible joy to be a part of yesterday’s extraordinary concert. My family members were stunned by the beauty of the “Requiem” which has left most of us profoundly moved.”

“Requiem for the Living” by Dan Forrest, composed in 2013, is scored for mixed choir and orchestra with solos for soprano and tenor. Combining both liturgical and non-liturgical texts, this powerful five-movement work projects a wide range of meaningful expression, from a biting essay on the vanity and pain of mankind to a plea for mercy, and finally a celebration of eternal light. The work has received more than a hundred performances world-wide within a year of its composition, including performances in Canada, South America, Europe, Africa, Asia, and multiple performances at Carnegie Hall.

We look forward to hearing from you!

Thank you to our season sponsor, First National Bank of Damariscotta!