Sheepscot Valley Chorus celebrates its 39th season with a “Christmas Pops!” concert on Sunday, December 8, at 3:00 p.m., at the Boothbay Harbor Congregational Church. Led by artistic director Linda Blanchard and accompanist Sean Fleming, the concert will feature Felix Mendelssohn’s brilliant Magnificat setting, the Magnificat in D. The concert will also include several jazzy arrangements of hit tunes such as “It’s the Most Wonderful Time of the Year,” “The Grinch Who Stole Christmas,” “The Christmas Song (Chestnuts Roasting on an Open Fire),” “I’ll Be Home for Christmas,” and more! The vocal talents of soprano Mary Sullivan, alto Jazmin DeRice, tenors Jesse Wakeman and David Myers, Jr., and bass John David Adams will be featured in solos, duets, and trios, and a jazz combo will accompany the chorus on several numbers.

Written in 1822 when Mendelssohn was only 13, the Magnificat in D is in seven sections, with solo movements interspersed with ones for full chorus. The musicologist and critic Hans Keller used to say that Mendelssohn was even more phenomenal as a boy prodigy than Mozart, writing more impressive masterpieces while still in his teens. In 1822 Mendelssohn was set by his teacher Karl Zelter to write pieces in the style of compositional masters such as Bach, Mozart, and Haydn, and so the Magnificat is similar to Bach’s compositional style. The Bach influence is quite apparent in the exultant opening, in which orchestral passages are alternated with choral passages. For the last movement, an exciting Haydn-like fugue ends the piece on a triumphant note.

The fabulous soprano Mary Sullivan will headline the second half of the concert. Sullivan will lend her inimitable talents to such pieces as “Gesù bambino,” “Maria Wiegenlied,” and the Roland Carter’s gospel hit “Mary Had a Baby.” The finale of the concert will be “Jingle Bells” as sung by Michael Bublé and The Puppini Sisters, accompanied by a combo including Marcus Hutchins, winds, Asher Barreras, bass, and Doug Kennedy, drums.

In the spirit of Christmas giving, Sheepscot Chorus asks concert attendees to bring a canned or boxed food item and/or a monetary donation for the Boothbay Region Food Pantry.

Tickets are $15 for adults and free for students, and may be purchased at Sherman’s Bookstore in Boothbay Harbor and Damariscotta, Treats in Wiscasset, and at the door. For more information, please visit facebook.com/sheepscotchorus and sheepscotvalleychorus.org. 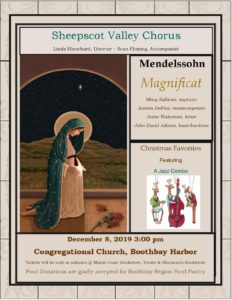 More Details of Past Performances

Thank you to our season sponsor, First National Bank of Damariscotta!